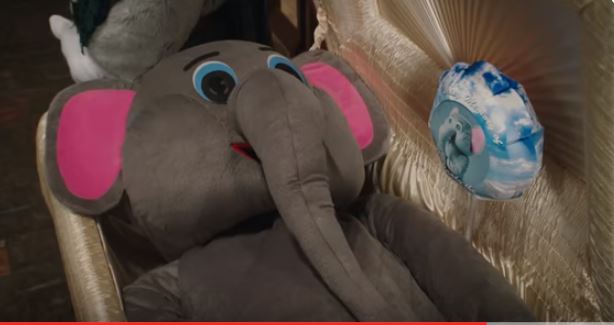 Three cheers for Christopher Guest returning with his first movie in 10 years.

Full disclosure: I enjoyed his earlier movies so much, I had the release date for Mascots set in my calendar for two months.

And it started off as I hoped. We’re introduced to the wide cast of characters,

each with a mascot and backstory sillier than the next. There are some familiar faces from previous Guest movies. Parker Posey plays Cindi Babineaux, who wears some kind of horse head when she’s performing and speaks in a thick southern drawl when she’s not. Zach Woods, who may now be more recognizable as the guide in the opening scene of Ghostbusters (2016), returns, this time paired with Sarah Baker as Mike and Mindy Murray, a husband and wife mascot team who perform as different mascots for the same team.

Jennifer Coolidge, Bob Baliban, Jane Lynch, Ed Begley Jr., John Michael Higgins, Fred Willard and Christopher Guest himself all return, but in supporting roles. And if I had to put my finger on why Mascots isn’t as good as it could be, perhaps that’s why. With the exception of Parker Posey, the most talented members of the usual ensemble aren’t playing any of the mascots.

Woods and Baker have the story that gets the most screen time. They’re good together, with some funny scenes. And new addition Tom Bennett as Owen Golly Jr. has only a few scenes but may be the funniest part of the movie. They all illustrate the principle that the funniest performances in Christopher Guest movies come from the actors who play it straight. Parker Posey and other regular players such as Michael Hitchcock and Christopher Moynihan also fall into this category.

But when an actor seems like they’re playing someone in a Christopher Guest movie, it just doesn’t work. Chris O’Dowd is an excellent actor and has had many hilarious roles, but here he’s almost mugging for the camera. His character, The Fist, an ornery hockey mascot, doesn’t give him much to work with, but in his out-of-costume interview scenes, his accent and his background stories are just too over the top. It’s like watching dinner theatre improv where everything about the performance is five times the size it needs to be because the actors are so tickled to be performing. Surprisingly, Christopher Guest himself also falls into this category with the return of Corky St. Clair, his character from Waiting for Guffman. The brief, forgettable appearance doesn’t figure into the plot at all and is basically just a wink to the camera.

Just as For Your Consideration is a different version of Waiting for Guffman, Mascots has much in common with Best in Show and A Mighty Wind, which I think are Guest’s two best movies. The crucial difference between them and Mascots is in the finale. In Best in Show, the dog show is narrated by Fred Willard and Jim Piddock. The commentary provides a context, placing a layer of absurdity over something the characters are taking so seriously. In A Mighty Wind, the musical performances are so well done and the songs are so funny, it nicely wraps up the whole movie.

The finale of Mascots has each of the mascots performing their routines before an arena full of people. But the routines are not funny enough or interesting enough to be the finale of the movie. Some of them don’t really make sense. What team has two mascots? And what are the pencil and sharpener mascots for? Have we even met them before? Imagine the finale of Best in Show without the commentators, and you have a pretty good idea of how Mascot ends. It’s a missed opportunity that could have saved the movie.