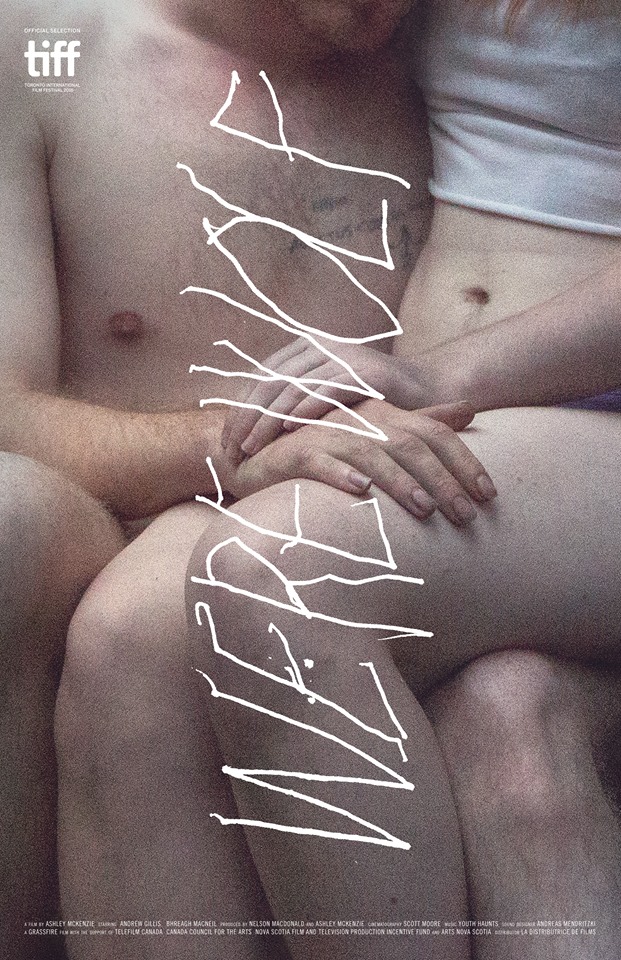 Werewolf is the gritty and absorbing first feature film from writer/director Ashley McKenzie.

Blaise and Nessa (Andrew Gillis and Bhreagh MacDonald) are recovering drug addicts, stealing siphoned gas from cars and hauling a lawnmower door to door offering to cut the grass for a few bucks. They are both enrolled in a methadone treatment program and regularly line up at a local pharmacy with others in the program to be given the orange liquid, which has to be drunk in front of the pharmacist to confirm it was consumed and not taken and sold on the streets.

They live in Cape Breton, an island that has never recovered from the collapse of natural resources industries decades ago. The backgrounds are full of ramshackle housing, boarded up businesses, yards with car parts on the lawn. If you’re from Cape Breton (like me), perhaps especially if you no longer live there (also like me), these desperate landscapes make you both nostalgic and sad with their accuracy.

Blaise and Nessa talk about leaving, but only with a vague sense of someday. They live in an abandoned motor home with no electricity or running water somewhere in the woods. Their faces have the scars and blemishes of addition. They exist in a haze that is replaced gradually by anxiety and then the physical pain of craving, until they receive their next methadone dose and retreat back into the haze. You’re left to wonder how much of an improvement this treatment could possibly be, given how they live.

Director Ashley McKenzie has complete command of the frame in every shot. You can tell very early on, you’re in the hands of someone with a clear vision that will be told with confidence. It’s astonishing that this is her first feature.

Gillis and MacDonald inhabit this world and these characters so convincingly, you’d swear you’d seen him loitering downtown, or that she’d served you ice cream last time you were at the Tasty Treat.

I like when I don’t quite get something in a movie, and it becomes clear as you watch the movie it’s an artistic choice I hadn’t understood yet. For example, the Cape Breton accent is a difficult one to imitate. It’s as musical as Irish and almost as fast as Newfoundland, but not quite either, and when an actor attempts it, it usually sounds like a bastardized hybrid of the two. Gillis is from Cape Breton, so I couldn’t understand why in some scenes, his accent sounded more formal than it should. Words ending in –ing actually had the G sound – something that just doesn’t ring true of you know real people like this character. Then I realized, that more formal pronunciation happened in scenes where he was talking to someone in a position of authority, like the methadone treatment coordinator. And that is absolutely accurate – he would want to sound like someone who had himself together, someone who is educated and responsible enough to be trusted with administering his own methadone at home, for example. That’s incredible attention to detail, all the more impressive because it’s a subtlety perhaps lost on most of the audience.

I also couldn’t understand what was happening with the colour in Werewolf. In some scenes, the colour is so faded it almost looks like black and white. Then in other scenes, some colours are unusually bright, almost over-saturated. Again, as the movie went on I realized that the colours corresponded to the cycle of craving and satisfaction – the colourless craving and the vivid euphoria. It’s a visual representation of a cycle that is so all-consuming, a werewolf is a fitting metaphor.

There is not much plot in Werewolf. It’s a character study of an addicted couple and of addiction itself. That isn’t necessarily a criticism, because for people in this desperate existence, life itself doesn’t have much of a plot.

The tragedy at the end of the movie is foretold in the opening scene, so we know where the story is going. But by then, we know these two characters and we understand that even in that tragedy, there is also a kind of hope. It is perhaps the first only real hope in this sad and brilliant movie.